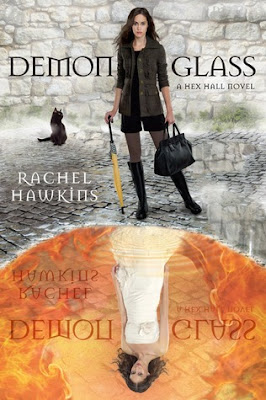 That was the whole reason she was sent to Hex Hall, a reform school for delinquent Prodigium (aka witches, shapeshifters, and fairies). But that was before she discovered the family secret, and that her hot crush, Archer Cross, is an agent for The Eye, a group bent on wiping Prodigium off the face of the earth.

Turns out, Sophie’s a demon, one of only two in the world—the other being her father. What’s worse, she has powers that threaten the lives of everyone she loves. Which is precisely why Sophie decides she must go to London for the Removal, a dangerous procedure that will destroy her powers.

But once Sophie arrives she makes a shocking discovery. Her new friends? They’re demons too. Meaning someone is raising them in secret with creepy plans to use their powers, and probably not for good. Meanwhile, The Eye is set on hunting Sophie down, and they’re using Acher to do it. But it’s not like she has feelings for him anymore. Does she?
***********
The first thing I thought after finishing Demonglass was OH. MY. GOD. First off, Sophie is just as sarcastic and lovable as in Hex Hall and so is her father. Second, the storyline of Demonglass is twister and darker than Hex Hall; More betrayal, more demons, and more drama. Did Sophie say life as a demon would be easy? As for all your Archer fans out there, yes he is back. But I prefer gardeners-- that wear plaid shirts--*cough cough CAL! cough cough*.  My only hang up on Demonglass is the ending. It was a WHAT-THE-FUDGE moment. But then again, authors do enjoy giving their fans a HUGE cliffhanger ending. Or so I'm told. So for you guys holding your breath, Demonglass is a must read-- as long as you can handle the one year wait for Raising Demons after the cliffhanger. I warn you, it's going to be hard. Good luck my fellow readers!

I would also like to thank Different Area Codes Book Tours for allowing me to be apart of the ARC tour!

Posted by DAMgirls: Daisy, Autumn, and Maysie at 8:09 PM

About Us: Daisy, Autumn, and Maysie: The DAMgirls

DAMgirls: Daisy, Autumn, and Maysie
We are two girls who love to read, write, and review! Autumn can be described by one word : change. Despite change, Autumn has come out okay, and her goal in life is to help others going through eating disorders, as she did. Daisy: Lets just say without out books... she'd die. Her goal in life is to get her personal library to 1,000. And then become an author. But now she'll settle for being a blogger. ;) + Maysie: Our secret editor!