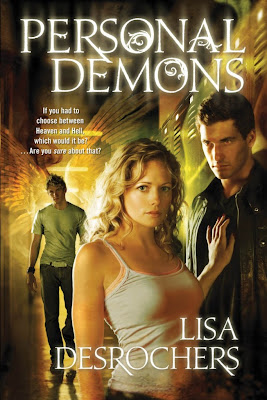 If you had to choose between Heaven and Hell, which would it be?
Are you sure about that...?
Frannie Cavanaugh is a good Catholic girl with a wicked streak. She's spent years keeping everyone at a distance--even her closest friends--and it seems her senior year will be more of the same...until Luc Cain enrolls in her class. No one knows where he came from, but Frannie can't seem to stay away from him. What she doesn't know is that Luc works in Acquisitions--for Hell--and she possesses a unique skill set that has the king of Hell tingling with anticipation. All Luc has to do is get her to sin, and he's as tempting as they come. Frannie doesn't stand a chance.
Unfortunately for Luc, Heaven has other plans, and the angel, Gabe, is going to do whatever it takes to make sure that Luc doesn't get what he came for. And it isn't long before they find themselves fighting for more than just her soul.
But if Luc fails, there will be Hell to pay...for all of them.
Sounds interesting, right? It is and nicely written and over all a good debut novel for Lisa Desrochers. The characters are real and vivid. BUT and my only BUT is that the book only had two perspectives instead of three: Frannie, Luc, and Gabe. Yet, there is only Frannie's and Luc's. Which saddens me because I would have liked there to be some suspense in the love triangle (a satisfying one no less). Hopefully in the next installment, she'll allow us a peak inside Gabe's head to even out the playing field.
Enough about romance! The book keeps a fast past after the first chapters are done painting the characters and the setting.  Villains from Hell come to visit after Luc falls for Frannie while Gabe's trying to convince Frannie to forgive herself and falls as well.
Interesting "things" that the author put into the story such as Luc smelling certain fragrances to mean different emotions. Who know chocolate meant love! I liked how it played into the story and made it flow nicely and didn't point blank tell you the characters emotions. Frannie practice Judo for years, so without that power, Luc would have a hell of a time reading her ( did you see my pun ;) ?).
Four out of Five stars from me
Read, Write, Love
Daisy
Posted by DAMgirls: Daisy, Autumn, and Maysie at 9:50 PM

About Us: Daisy, Autumn, and Maysie: The DAMgirls

DAMgirls: Daisy, Autumn, and Maysie
We are two girls who love to read, write, and review! Autumn can be described by one word : change. Despite change, Autumn has come out okay, and her goal in life is to help others going through eating disorders, as she did. Daisy: Lets just say without out books... she'd die. Her goal in life is to get her personal library to 1,000. And then become an author. But now she'll settle for being a blogger. ;) + Maysie: Our secret editor!